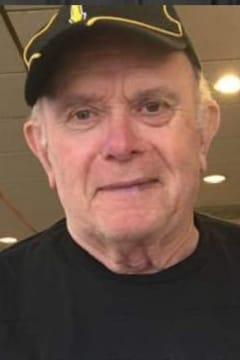 Anthony Patrick “Tony” Wentz, 83, of Indiana, formerly of Carrolltown, died Thursday, July 7, 2022 at Arbutus Park Manor in Johnstown surrounded by family. Tony was born January 16, 1939 in Spangler to his late parents, Rudy and Agnes (Kelly) Wentz. Tony is also preceded in death by his siblings Judy Owens, Mary Jo Malloy, Tim Wentz, and Tom Wentz. Surviving family include his wife of 56 years, his “Flower,” Catherine (Gartlan) Wentz, formerly of County Louth, Ireland. Also surviving are his daughter Kelly (Tom McVicker) of Indiana, and his sons Brian (Krista) of Sharon, Sean (Karen) of West Haven, Connecticut, and Kevin of Pittsburgh. Additionally, Tony is survived by granddaughter Jocelyn Clayton (fiancé Cameron Nellis) of Indiana, and Step-Grandchildren Amanda, Tommy, Sarah, Clay, Danny, and Drew. Tony is also fondly remembered by numerous nieces and nephews. In his high school days, Tony enjoyed playing football for John Carroll High School as the running back, sporting his # 21 jersey on the field. In the fall of 1956, Tony and his team were undefeated for 12 games. After high school, Tony served as an AM2 in the United States Navy. He was stationed for four years in Hawaii, where he enjoyed fishing and surfing. Upon his return home, Tony met his wife at an Irish pub in Washington DC. Tony spent 38 years working for Murry’s Steaks and moved with Catherine to Indiana, where they raised their four children. In his free time and upon retirement, Tony enjoyed playing tennis with friends and golfing with his nephews. He also enjoyed playing guitar and singing his favorite tunes, particularly after a few drinks with those he loves.
Above all, Tony was a loving and devoted husband and father and a doting grandfather with lots of stories and jokes to tell. His dedication to those close to him is unmatched. He will be greatly missed. Friends and Family will be received Sunday from 2:00 to 6:00 pm at Stevens Funeral Home, Inc. 146 North Main Street Carrolltown, Pa, coincidentally along the same street that he was raised– Wentz Street. Funeral Service will be held Monday at 10:30 am at the funeral home, by Pat Owens. Committal St. Benedict Cemetery, Carrolltown. Full military rites will be accorded by local veterans organizations. In lieu of flowers, memorials are requested to Anthony’s family or charity of choice. You may leave online condolences at www.stevensfamilyfuneralhomes.com or on our Stevens Family Funeral Homes Facebook page. “God is great, beer is good, and people are crazy.”