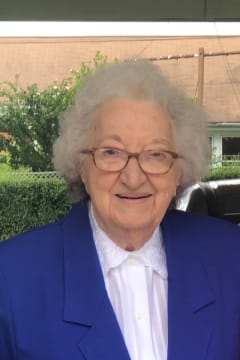 Obituary For Josephine A. Dominick

Josephine A. Dominick, 98, Carrolltown, passed away April 1, 2022 at The Campus of the Jewish Home of Greater Harrisburg. She was born April 27, 1923 in Elmora, the daughter of Nunziato and Conchetta (Isgro) Dominick. In addition to her parents, she was preceded in death by brothers Sam, Frank, and Tony Dominick; sisters Sandie and Margaret Dominick, and Carmela (Millie) Terrizzi. She is survived by sisters Angela Raffa, Washington Twp., MI, Marie Teresa Leonard, Harrisburg; brother Jack Dominick, Carrolltown and numerous nieces and nephews. She was a graduate of Carrolltown High School in 1941 and moved to Harrisburg soon thereafter for work. Josephine was an Executive Secretary for the Department of Labor and Industry Bureau of Security, retiring after 38 years of service. She enjoyed sewing, traveling with friends, spending time with and caring for her family and volunteering at St. Patrick’s Cathedral, Harrisburg and St. Margaret Mary Catholic Church, Harrisburg. She was also a lifelong member of St. Benedict Catholic Church, Carrolltown. Friends will be received in the Boniface Wimmer Room at St. Benedict Catholic Church, Carrolltown, Friday from 9:00 am until the 10:00 am Funeral Mass at the church, by Rev. Michael Gabler, OSB. Interment is the church cemetery. In lieu of flowers, memorials are requested to St. Benedict Catholic Church, Carrolltown or Alzheimer’s Association at www.act.alz.org. Funeral arrangements are under the direction of Stevens Family Funeral Home, Inc., Carrolltown. You may leave online condolences at www.stevensfamilyfuneralhomes.com or on our Stevens Family Facebook page.