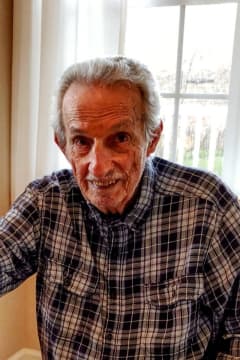 Walter Michael Farabaugh, 95, passed away on January 27 in State College, PA. He was born September 18, 1926, the son of Michael and Maude (Trexler) Farabaugh. He is preceded in death by his parents, four brothers, 10 sisters, and wife of over 60 years, Dorothy (Podelco). He is survived by his sister Mary Lee Yarko, daughters Katherine Adrian, Krista Murray, Kurta Cady, Cecilia Farabaugh and their families. He was a member of the Carrolltown high school football team when at age 17 he left to join the US Navy in 1944. His parachute training included jumping out of a zeppelin in New Jersey. He was a WWII parachute rigger and trained the pilots on all the survival gear. He was stationed in the Philippines before assignment to NARTU in Anacostia, MD. There he would make lifelong friends settling in Lanham MD in 1959. He marched in President Kennedy’s funeral procession in 1963 and received letters of appreciation from the Secretary of the Navy, Secretary of Defense , etc. He was on numerous sports teams including football, volleyball, bowling and softball. He began his second career as a vending supervisor at Goddard Space Flight Center after he retired in 1966. For decades, he was an usher at RFK Stadium for his beloved Redskins games. In 1994 he moved back to Carrolltown and enjoyed time with his family, playing golf, painting and watching football games. He was a member of St. Benedict Catholic Church, Carrolltown and Carrolltown American Legion Post 506. Visitation will be held Saturday, February 5, 2022 at the St. Benedict Catholic Church, Carrolltown Boniface Wimmer Room from 9:00 am until the 11:00 am Funeral Mass at the church, by Rev. Michael Gabler, OSB. Interment church cemetery. Full military rites will be accorded by local veterans organizations. Arrangements are under the direction of Stevens Funeral Home, Inc., Carrolltown. You may leave online condolences at www.stevensfamilyfuneralhomes.com or on our Stevens Family Facebook page.